A DAY AT THE “DYNAMIC AUDIO” RECORDING STUDIO IN BERLIN 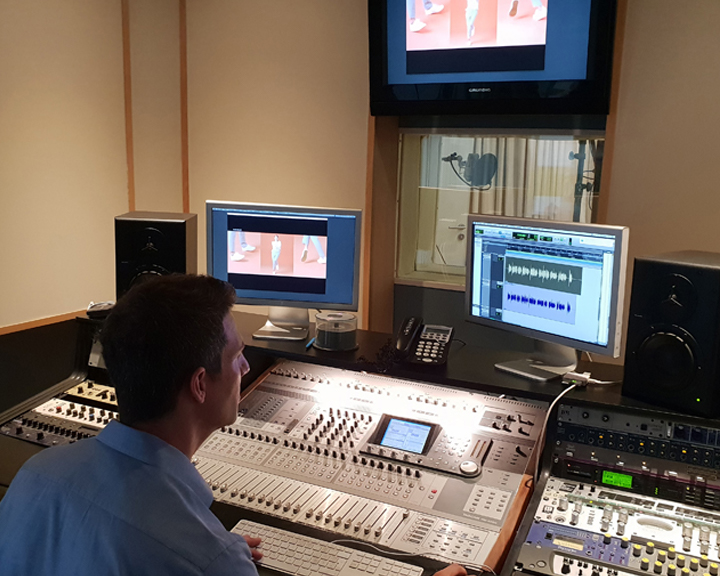 A recording studio – the words typically conjure up images of a tiny, stuffy room devoid of natural light. When we think of music production, the image that often comes to mind is that of repetitive hours of tedious work to make something that doesn’t even make it to the charts’ top 100, or of TV dubbing so dubious that the result is scarcely watchable.

We have made it our mission to dispel these images – which is why we paid a visit to audio agency dynamic audio. This audio agency has been based in Kreuzberg, Berlin since 2007 and offers much more than just speech recordings. Its bright and friendly office spaces reflect the quintessential charm of the Berlin courtyard building, and there’s also a built-in recording studio.

CEO Christian Schneider let us take a peek behind the scenes, and answered a few questions that we’d been wondering about for quite a while.

What kind of jobs do you typically do as an audio agency?

When it comes to dubbing, we don’t work on all that many TV movies. Instead, we tend to do corporate films, e-learning productions, and safety films. Anything language-related. We provide narrators. We record narrators in over 20 languages. It’s often the recording studio that acts as the center of communication between the film production company, translation providers, and various other agencies. So, we say what we do is just about anything to do with audio.

What types of professional audio recording are currently most in demand?

When we first started we did a lot of telephone recordings. Back then there was a lot of demand for big, interactive systems. We provided a speaking movie theater service for one of these systems, as well as a live soccer update service that you could call up. Interactive information was part of it all, too. We also recorded artificial voices that could give out addresses automatically.

These days, seeing as everyone has a cell phone, we hardly do any interactive systems like that anymore. What has developed in their place are online films that are hitting the Internet thanks to higher broadband speeds.

Almost every company wants to have things like brand image clips, instructional films, or filmed tours of their offices. For instance, a company might come to us and say: “We’ve made a film and we want to produce it in 16 different languages for all our locations around the world.” In cooperation with language service companies, we then create the translations and recordings for them.

Can you describe a typical production day at a professional recording studio?

First we look to see if we have all the texts we need. Then we also need to see what genre the texts are for. For advertising recordings, for example, we need to use different technical settings than we do with technical productions.

We also do a lot of coaching. To give an example, in order to do their job propertly, the narrators need to know what industry the text is for. What actually is the message? It’s our job to direct and coach the narrator so that he or she can open up a matching world of imagery. The resulting quality is higher than it would be if we left the narrators to do it all by themselves.

Then we start recording with the narrator. For major productions, I’ll be there along with a technician and a director. Sometimes it’s hard to keep track of some things – for example when you’re dealing with a computer game with 5,000 takes and 38 characters. It’s times like those when a director is helpful. Often the client will be there, too, or watching via Skype so they can have a say and direct the recording according to their wishes. Then, once the recording is finished, the real work begins.

The recorded material gets edited and spliced. The best takes are chosen, and anything undesirable is taken out – like unwanted breathing noises, for example. That’s followed up with the fine production, mixing, and a music soundtrack. This is the more creative bit. That’s a typical day for us.

What does the future have in store for professional audio production?

Artificial intelligence and natural language produced by robots are always hot topics. Nonetheless, there’s no robot that can replace a real person. That’s why we’re going to keep working with real people in the future – we’ll keep on recording real people, so that we can convey real emotions.

But the technical aspect can be simplified in future with specialised computer programs – I don’t particularly want to keep cutting and splicing at a tape machine with shreds of tape flying off my fingers, for instance. However, it makes me very happy to be able to look at each file again, listen to it, and use my human intuition to work on it. That’s a form of quality assurance that no machine can ever replace. In the realm of emotion, machines can’t cope. Another big market at the moment is e-learning for employees who need training.

How do you collaborate with language service companies?

Since we’re an audio agency, we’re normally the last ones to receive the texts we work on. For us, it’s important that the language is adapted to match the timing of the film segments,, especially with localization projects. For example, if you’re translating from English to Spanish, most of the time the Spanish text ends up 30–40 percent longer – and if the text has to fit into a given segment of film, that just doesn’t work. Timing is truly everything. When you have languages such as English, Spanish, and French all lined up next to each other, it’s especially important that the take lengths are more or less the same. It’s also extremely important to us that the texts are translated by native speakers. Text is so sensitive.

After the interview, we were taken on an exciting tour of the studio. It goes without saying that we’re very grateful for this opportunity to go behind the scenes at dynamic audio. You can find more information on the dynamic audio website. dynamic audio. Are you interested in EHLION’s voice-over or soundtrack services? We’re happy to give you more information!

News
Cultural Coaching
All about Language
Language Learning
Translating for a living
← PROFESSIONAL TRANSLATION SOFTWARE: EHLION IS AN SDL TRADOS PARTNER! WORLD LANGUAGES: WHICH ARE THE MOST WIDELY SPOKEN LANGUAGES IN THE WORLD? →